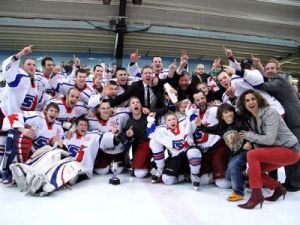 9 Hockey Management would like to congratulate client Pete Russell after leading his Slough Jets to 7-4 aggregate win last night to clinch the English Premier League Cup.

Head Coach Russell, who is in his second season with Slough has continued his success at The Hangar following last season’s playoff championship.

The Scot who is also Great Britain under 20’s head coach will be looking to retain the title with the final four weekend only two weeks away.