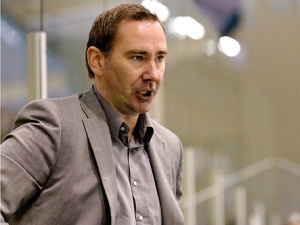 Photograph of Chris Eimers with special thanks to Fintan Planting: www.9pm.nl.

9 Hockey Management are delighted to confirm that client Chris Eimers has joined the Heerenveen Flyers as head coach for the 2012/13 season.

Eimers has spent the past two years in Geleen where he led the Smoke Eaters to their first ever Dutch playoff championship.

Prior to Geleen, Chris had spent the 2008/09 season as head coach in Heerenveen before making the move to the Nijmegen Devils in 2009/10 where he also won a landskampionen.