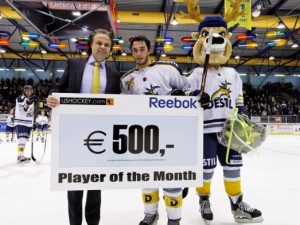 Congratulations to 9HM client Josh Prudden who has won the Reebok Hockey / ijshockey.com December player of the month for the Dutch Eredivisie.

The 31-year-old American posted an impressive 6 goals and 19 assists during December to lead the Dutch Eredivisie in scoring.

This is Prudden’s first season in the Dutch Eredivise with the Tilburg Trappers having spent the previous two season’s with the Belfast Giants of the British Elite League and Sterzing/Vipiteno of the Italian A1.